Due to a recent law change, conversions to a Roth IRA are now available to anyone, regardless of income, and the Roth’s chief selling point—tax-free income for you and your heirs—makes it tempting to convert. But there’s also a primary drawback, the requirement that you pay income tax on the money you move out of your traditional IRA. One way to reduce or eliminate that tax bite is to offset conversion income by deductions for charitable giving. 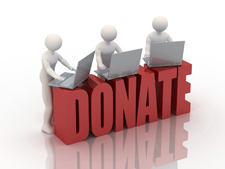 If you convert a large IRA to a Roth, your income tax bill will be significant. Coming up with the money without tapping your retirement funds could be difficult. Yet while a Roth conversion will add to your taxable income, a charitable deduction could reduce it. If you’re planning to make a major philanthropic gift, timing it to coincide with your Roth conversion could result in substantial tax savings.

Suppose you own a block of appreciated stock in your company that you’d like to contribute to your alma mater. If you’ve held the stock for at least a year, you can generally deduct its fair market value from your taxable income as long as the value of the gift doesn’t exceed 30% of your adjusted gross income (AGI) for the year. So if your annual AGI is $200,000, you could deduct a donation of shares worth $60,000. For cash donations, the ceiling is 50% of AGI. If you don’t have a specific charity in mind, you might set up a donor-advised fund. Your donations will be deductible immediately, but you can choose recipients later.


Deductions for charitable gifts can fully or partially offset your tax liability for a Roth conversion. And, keep in mind that the top tax rate on ordinary income was recently raised to 39.6%. That could raise your taxes on a Roth conversion, though of course the value of charitable deductions will also rise with higher tax rates. (Another tax law provision that went into effect at the same time may reduce certain itemized deductions, including deductions for charitable donations, for upper-income taxpayers.)

Just as tax considerations shouldn’t dictate investment decisions, the immediate tax consequence of choosing a Roth conversion—or the deduction for making a charitable contribution—isn’t likely to be your primary consideration for making either move. Whether it makes sense to convert some or all of a traditional IRA to a Roth involves such factors as your age, your expected tax rate during retirement, and whether you expect to leave retirement plan assets to your heirs. We can help you weigh the pros and cons of a conversion and consider the impact of your charitable giving plans.